In a very close contest which was decided on the time element of the event World Championship leader Toni Bou – Repsol Honda came home in second place behind his nearest rival in the championship Adam Raga – Gas Gas. Both riders were locked in battle for victory and finished on two marks lost having pulled well ahead of the rest of the competitors. With no other way of deciding the winner on marks, Raga was eventually declared the winner by just over three minutes from Bou. For Takahisa Fujinami – Repsol Honda his sixth place result has pushed him down another position in the overall championship table.

La Mongie (France) – 27.07.2014. The village of La Mongie stands tall in the French Pyrenees at an altitude of 1,800 m and around 20 kilometers from the Spanish border. La Mongie is predominantly a winter ski resort offering all forms of snow action but is also a very popular destination for road and off-road Motorcycling and Cycling. France has been one of the regular features in the World Trial Championship calendar ever since the competition came into existence in 1975. 1991 was the only year when the trial was absent from the championship but Massais held the Trial des Nations the same year. The La Mongie resort hosted the event for the first time and a crowd of around 3,000 people enjoyed the warm weather conditions. The event, organised by the clubs AMC Grasse, MC La Gaude and the S2-Toulouse Trial Club, took in 12 sections over three laps most of which were made up of dry rock in this mountainous region.

In a very tense low scoring event the result for the top two riders, Toni Bou – Repsol Honda and Adam Raga – Gas Gas was always going to be very close. On the opening lap both riders kept their feet firmly on the footrests until section six where Bou parted with a single mark as Raga took control with a zero score. There nearest challenger was Jeroni Fajardo – Beta who was on a score of five. Takahisa Fujinami – Repsol Honda had parted with a score of fourteen which would keep him out of the top five. With the pressure now on both riders it was the turn of Bou apply it on the second lap which he did as Raga had two single mark penalties on sections six and nine whilst Bou only parted with a single mark on the final twelfth section. This ensured the two riders had equal scores going into the last lap. In a brilliant duel played out between the sports two finest riders, neither parted with a single mark bringing the time element into play. It was Raga who came out on top as he competed the course in the shortest time to take the victory from Bou and claw back vital points in the championship chase. The final place on the podium was taken by Jeroni Fajardo.  Fujinami had improved his score on the second lap but he could not recover from his heavy loss on the opening lap and took a lowly sixth position at the finish of the event.

The FIM World Trials Championship will now take a Summer break until it moves to Spain for the final round which is a double header taking place over the weekend of the 6th – 7th September.

“I am disappointed with my results today as I expected to be able to fight for the third position in the championship table. Each of my three lap scores were spoilt by five mark penalties. The good news is that my damaged right knee has been okay and I look forward to the summer break in the championship”. 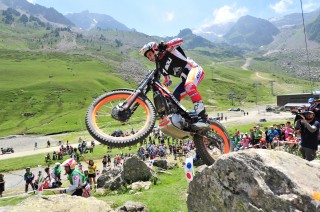 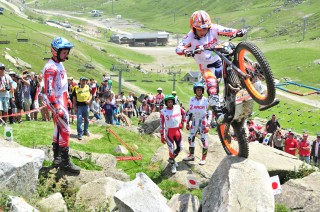 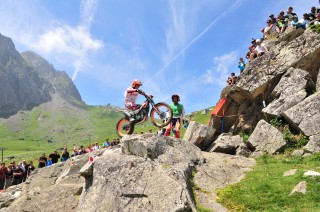