It was business as usual for current world trials champion Toni Bou – Repsol Honda on day two in Australia as he took a clear win from Adam Raga – Gas Gas with Jeroni Fajardo – Beta, third. After taking the win on day one of the Grand Prix of Australia which opened the 2014 FIM series Takahisa Fujinami – Repsol Honda could not carry the form into day two and finished a lowly sixth.

The organisers had made modifications to six of the hazards for the second day in order to extract more marks from the riders and this clearly showed in the final scores. It was clear blue skies once again over the event for the competitors as they set off to compete over three laps of fourteen sections.

The opening lap is always difficult as the riders watch each other’s attempts to gain the advantage and Bou made his move on section seven as he was the only rider to lose no marks which boosted his confidence for the remainder of the lap. The difficult section thirteen though would once again prove difficult as Bou stopped and lost five marks with only the Sherco rider Alexandre Ferrer losing no marks for a spectacular clean ride. Fujinami and the young Spanish rider Jorge Casales – Gas Gas would be the only other two riders passing through the ends cards as the rest of the entry failed. As the first lap scores came in Bou on five marks held the advantage from Raga who was on ten which consisted of just two five mark penalties. The other leading riders had scores of over twenty each such was the dominant riding of the leading two.

On the second lap Raga knew that to challenge Bou he would have to keep the pressure on but Bou parted with just a solitary mark on section two though Raga also improved from his first lap to drop only two single marks on sections three and ten as these two riders pulled away from the rest of the entry to make the fight for the win there own.

Another notable performance came from Great Britain’s James Dabill – Beta who had a lap score of seven but he had accrued too many marks on the opening lap to make a serious challenge for a place on the podium.

It was a very tense final lap for Bou and Raga as they knew that one slip would change everything but they both held their nerve and parted with only single marks each to give Bou the victory. For Raga the damage had been done on the opening lap and despite some excellent riding he had to admit defeat to his Spanish rival and current world champion. For the other competitors the modifications to the hazards had certainly made make them harder to clean and Jeroni Fajardo came home a distant third. Fajardo again claiming his third position on the tie breaker rule having finished on thirty nine marks together with Albert Cabestany – Sherco.  Cabastany making up for his disappointing sixth position finish on day one.

Toni Bou now takes a seven point advantage in the championship standings to the next round in Japan later this month.

“The pressure has been on me to win today and I am very happy to take this victory. Second position yesterday was a good start to this year’s series but I now have the confidence to carry this victory to the next round in Japan. I would like to thank everyone in Australia for the support and also my team Repsol Honda for a good job”.

“I have been frustrated with my riding today as maybe I was expecting too much after the win yesterday, maybe I tried to hard today. I am now in second position in the championship which I am happy with as the series moves later this month to my home round in Japan”.

Trial Round 1   Trial of Australia Tarrengower 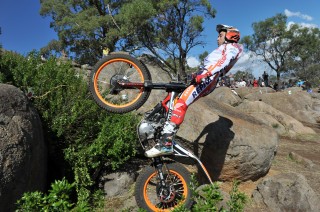 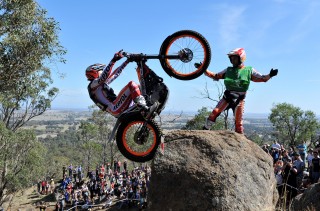 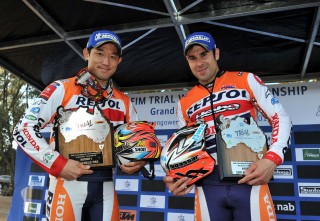 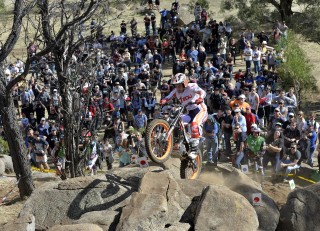