An extraordinary Toni Bou once again manages to finish second in the Japanese Gran Prix in spite of going into the event with a serious rib injury. Repsol Honda Team team mate, Japanese Takahisa Fujinami, finishes in fourth. Bou continues to keep his place at the top of the World Championship leader-board.

The world champion, once again, put his extraordinary courage, physical and mental abilities on display, managing to both finish the Japanese Grand Prix, and get a magnificent result in the process. All this despite going into the competition carrying an injury.

Toni Bou was in the running for the victory throughout the entire competition, and even managed to find himself at the top of the score-sheet at the end of the first lap, as he battled to overcome the intense pain caused by the cracked rib. The second lap proved to be a lot harder for the Spanish rider, grimacing in pain aboard the Montesa Cota 4RT, picking up points in a couple of the sections, which kept him off the top spot. On the final lap, and completely out of strength, the rider refused to throw the towel in, and took the overall second position, which allows him to hang on to his overall world championship lead.

Neither was Repsol Honda Team-mate Takahisa Fujinami able to give the large home crowd the delight they wanted, here at the Motegi circuit in the world championship’s second race. A hard blow to the knee yesterday practically put an end to the rider’s chances. Fujinami had began the race today in a podium position, but continued to lose strength in his right knee as the competition progressed, excessively punishing the left one in the process. The rider could only watch as the third place began to slip away from him on the final lap. In spite of the fourth place in Japan, Fujinami holds third position in the overall championship standings.

Next stop for the World Championship is the European Grand Prix, which will be held in Ile Rousse, on the French island of Corsica on May 24 and 25.

"Physically, I’m wiped out. We battled all we could to be able to finish the race. The way that it turned out, I think we got a result. I got off to a good start on the first lap, near Adam, on the second I started to feel bad, and by the third I was totally wasted. Even so, I’m really pleased to have finished. We weren’t able to win, but we come away as leaders, so we can’t complain. I’ll stay here for a few days to recover then I’ll go back and visit the doctor, but I already know what I have to do; not train so that I can get over the injury. I hope to be able to make it to the next race in top physical condition."

"I finished yesterday in a lot of pain. Today, I started off a bit better, but from the second lap onwards, I was without energy. The knee wasn’t holding up. I knew what Cabestany’s points were, and I wanted to outdo him and make it onto the podium, but I didn’t manage to. I knew that there was a good chance here to make up points in some sectors if you are able to finish them. I was up for it, but I couldn’t do it. It is a pity, because there were a lot of fans here that got behind me. Fourth place leaves a bitter flavour because I don’t think it’s a very good result. I want to thank all the fans, and Honda for all the support that they have given me in this race."

Trial Round 2   Trial of Japan Motegi 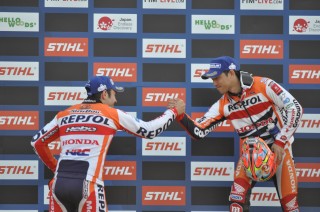 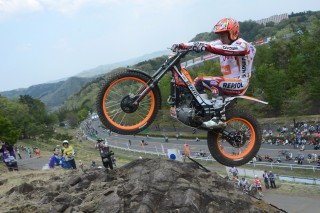 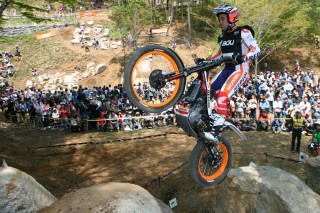 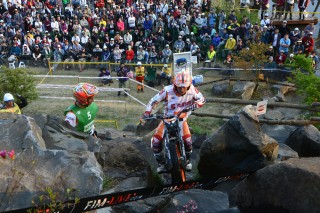