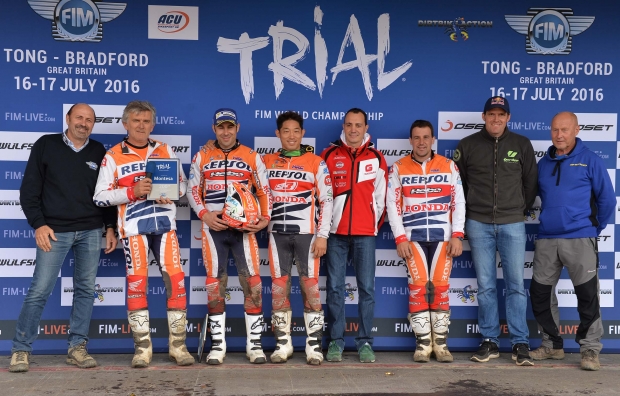 A mighty Toni Bou, once again showing all the hallmarks of a champion, sealed victory in the British GP while Montesa took the manufacturer’s prize reaching a tally of 200 triumphs.

Toni Bou showed his true colours and impeccable style to win a complicated trial. Rain, on the eve of the event, made things all the more difficult. Indeed, it was during the opening two-thirds of the trial that mud hampered proceedings, and it was precisely there, where the Repsol Honda Team ace was able to truly shine. Bou picked up just a single mark on the first lap, three on the second and then produced a flawless, mark-free final lap on the Montesa Cota 4RT to sentence victory. Another well-deserved victory in the bag. The win brings the season’s total to nine out of the twelve trials disputed. Furthermore, the champ extends his overall lead to 28 points due to his nearest rival finishing in third spot.

Bou’s teammate in the Repsol Honda Team, Takahisa Fujinami, got bogged down on the first lap, notching up too many points as he tried to get a grip of the course. However, the Japanese rider rallied, producing a notable second rotation which brought him back into contention. In the end he narrowly missed out on a fourth final position by two points. ‘Fujigas’ does, nevertheless, hold on to the overall third spot.

Jaime Busto got off to a poor start in Tong and in spite of battling on, was unable to pull back. The teenager struggled to find the rhythm and failed to put the finishing touches on some of his better moves. The Repsol Honda Team Basque rider did, however, fight back from eleventh place at the end of the first lap to a final seventh position at day’s end. Busto now lies in fifth overall place in the championship.

Montesa, 200 wins and a 19th constructor’s championship
On the first day of the British Grand Prix, Montesa clinched top honours in the FIM Trial World Championship, mathematically guaranteeing their 19th manufacturer’s title – the 11th consecutive one – thanks to the points accumulated by the Repsol Honda Team.

Montesa has won in every single country that has hosted the world championship: 24. From Japan to the US, from Sweden to Portugal, even passing through Australia, Guatemala and Luxemburg. Toni Bou, with 84 triumphs, has brought the highest number of wins to the brand, followed by Dougie Lampkin (50), Marc Colomer (15), Ulf Karlson (15), Malcom Rathmell (11), Takahisa Fujinami (10), Gordon Farley, Marc Freixa and Manuel Soler with 3 wins, Benny Sellman with 2, and Amós Bilbao, Rob Edwards, Don Smith and Yrjo Vesterinen with 1.

Montesa has achieved 526 podium places to date. France is the country where more Montesa riders have been on the podium: 61. This is followed by Spain with 54 over the history of trial’s top category.

I am really, and I mean, really happy. Today everything went really well. We did the first lap really well and that gave a big advantage. I went very comfortably throughout the day. The third lap was fantastic. I’m really happy about the way that team has worked. The result opens up a lot of possibilities for us in the championship and I would also like to congratulate Montesa for the win in the manufacturer’s championship.

The first lap went really badly. I couldn’t get out of the hole; I don’t know what happened. Maybe I put too much pressure on myself. It just didn’t feel right and every time that I tried things, they just didn’t work out right. In the end I changed everything around and I began to pull back on the second lap, with half the points of the first lap. I knew that it was very tight and that I had to pull something good out of the bag for the final lap. But I picked up a five at the final hazard. I hope that tomorrow goes much better. Congratulations to Montesa for the constructor’s championship and for the 200th win in the world championship.

A disaster of a trial. Nothing worked out right for me. I wasn’t able to improve and the worst thing is that I don’t know why. I didn’t feel comfortable with the rhythm of the trial in spite of the fact that the sections were easy. Tomorrow I will have to get a better result.

I would like to thank all the riders who have helped us to achieve the 200th victory in the Trial World Championship. Today is a very happy occasion for all of us. Over this period there have been so many riders that have passed through our ranks, but also very many mechanics and team members who have helped us to become what we are today. I would like to thank each and every one of them for all their effort and hard work. 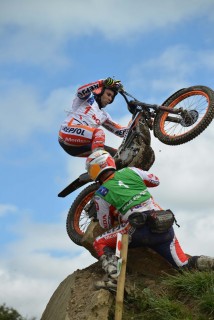 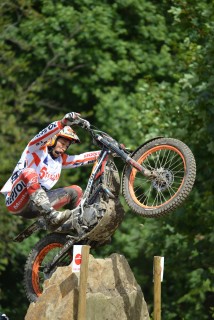 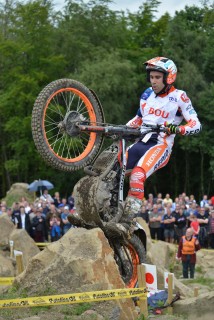