A superb demonstration of trials riding from the current World Trial Champion Toni Bou – Repsol Honda carried him back to the top of the championship table by a single point courtesy of a massive victory in Italy over his nearest rival Adam Raga – Gas Gas. It was a disappointing day for his team mate Takahisa Fujinami – Repsol Honda who came home in sixth position and slipped to fourth in the overall point’s standings.

This year’s Grand Prix of Italy was based around the town of Alagna Valsesia set in the mountainous terrain approximately one hundred kilometres North West of Milan, at an altitude of over one thousand metres! The event was round four of this year’s FIM World Trial Championship and was besieged by thousands of home fans who enjoyed the action and contributed so much to the success of the competition. The event was contested on the rocky wooded hill side over-looking the town with three laps of twelve sections ridden in fine but over cast weather which is typical of this mountain region.

For Toni Bou the day did not start as he wanted when he took five mark penalties on sections two, four and six before he found some rhythm in his riding to finish the first lap with a score of nineteen which included some single mark penalties. His chief rival in the championship and series leader before Italy, Adam Raga fared not much better than Bou as he also included three five mark penalties in his total of twenty one for the first lap.

Holding the lead after the first lap certainly spurred Bou on as he recorded a single figure score on the second lap parting with a mere seven marks to Raga’s nineteen. Other riders with good second lap scores were eventual fourth and fifth place finishers Jeroni Fajardo – Beta, eighteen and Great Britain’s James Dabill – Beta on nineteen. Sherco mounted Albert Cabestany was very consistent with three lap scores of twenty two which would eventually put him in third position one mark in front of Fajardo.

On the final lap and knowing he would need a miracle to catch eventual winner Bou, who finished again on a single figure total of six, Raga simply could not match the pace of his fellow countryman losing seventeen.. Victory for the Repsol Honda rider moved him back to the top of the championship standings by a single point.

Bou’s Repsol Honda Japan’s Takahisa Fujinami put in a fighting come back on laps two and three to finish sixth after a disastrous opening lap when he parted with forty two marks. His sixth place finish today dropped him to fourth in the championship standings, three points down on Cabestany in third.

The FIM World Trials Championship will now take a short break until round 5 in Belgium on July 13th.

“This is a fantastic result for both myself and the team. After losing nineteen on my first lap I knew I could improve and the single figure scores from the second and third laps speak for themselves. The hazards were very slippery today which I think was because of the moisture in the air due to the high altitude but we coped well with this. Now I have the lead in the championship I will focus on increasing this as we move to the next round in Belgium after a short break from the championship”.

“I could not find any rhythm in my riding on the first lap which left me with too much work to do on the second and third laps to defend my third position in the championship. The overall points totals are still very close for third position with Albert Cabestany just in front of me and so I will focus on this in an effort to move back into third position in the next few rounds”. 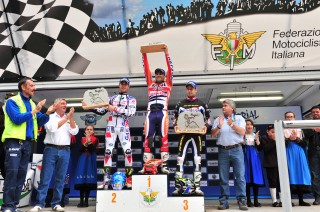 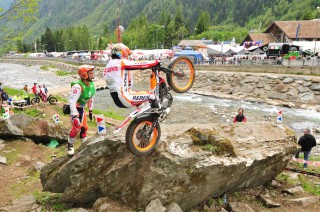 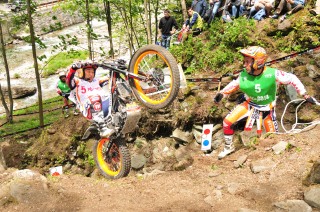 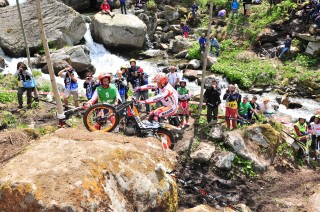