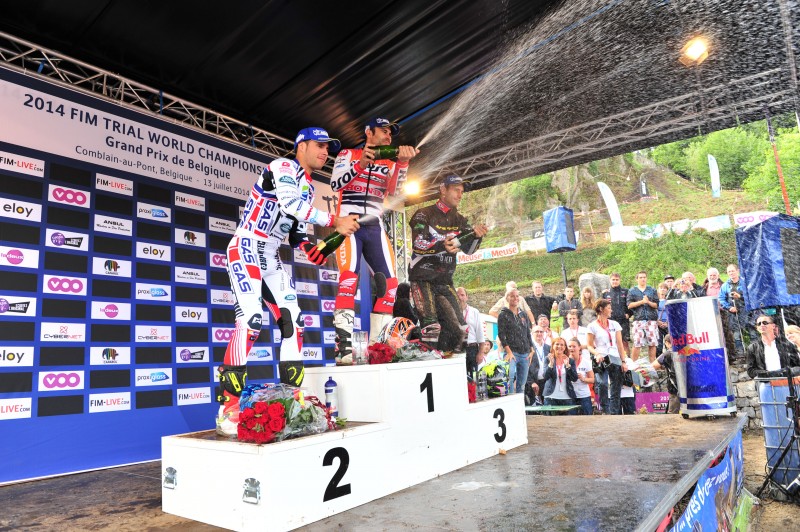 In very difficult wet conditions which played a major part of the event in Belgium Toni Bou – Repsol Honda further extended his championship lead in the points table over his nearest rival Adam Raga – Gas Gas with a well-earned victory. It was also a good day for his Japanese team-mate Takahisa Fujinami on the second Repsol Honda who continues his fight in the overall championship table to come home with a strong fourth place.

Comblain au Pont (Belgium) – 13.07.2014. It has been seven year’s since the FIM series visited Belgium which is the home country of the three times World Trials Champion Eddy Lejeune who took his victories consecutively from 1982 – 1984 riding the Honda RTL 360cc at the famous Bilstain venue. The small town of Comblain-au-Pont is located South of Liege and it played host to round five of this years FIM World Trials Championship. The weather started dry but overcast before a storm unleashed itself for a short period of time before the rain set in for the remainder of the day. This did not dampen the spirits of the crowd of 6,000 supporters who braved the conditions. The first of the three laps of the twelve hazards started in the dry before the rain which is so familiar with this area came down.

The pressure on the two leading riders in the championship Toni Bou – Repsol Honda and Adam Raga started very early on the first lap when Bou took a three mark penalty on section three followed by a clean on section four. Two five mark penalties followed including one when the tyre was damaged and deflated in the hazard. This moment was quite critical as it allowed Adam Raga to take the lead by two marks at the close of the lap. Albert Cabestany – Sherco was also in the mix with an opening score of twenty six.

Bou changed into his wet weather clothing as the rain came down and came out fighting at the start of the second lap as he cleaned the first eight sections in a show of incredible riding and his lap score of thirteen was the best of the whole event. After a very difficult opening lap Takahisa Fujinami improved and his score of twenty six moved him back up in to the leading positions. On the final lap Raga produced a score just in front of Bou’s but the current World Trials Champion knew exactly what he had to do and he kept calm to take yet another victory as Fujinami kept his riding consistent to take fourth place finishing three marks in front of Jeroni Fajardo.

The FIM World Trials Championship will now move to Great Britain for the next round which is a double header taking place over the weekend of the 19th – 20th July.

“This victory is very important for me as the Belgium round starts a three week run of championship events. The trial started in the dry but the conditions changed very quickly as the rain came down as we finished the opening lap. I have extended my championship lead but I cannot rest as I must keep pushing at every round. The team has worked well today as we continue to chase another championship victory. I now look forward to the two-day event next week in Great Britain”.

“My first lap of the event was not so good as we came to terms with the wet and muddy conditions. I rode much better on the
second and third laps bringing my scores down and in line with the other top riders. I am still fighting for the all-important top three finish in the championship”. 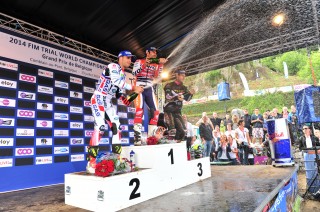 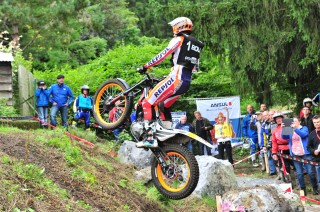 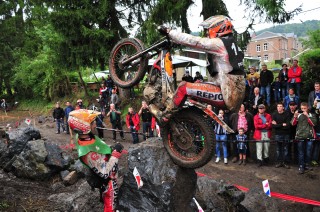 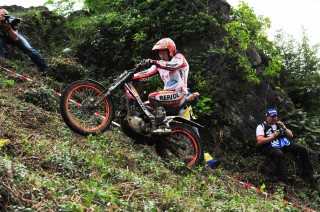