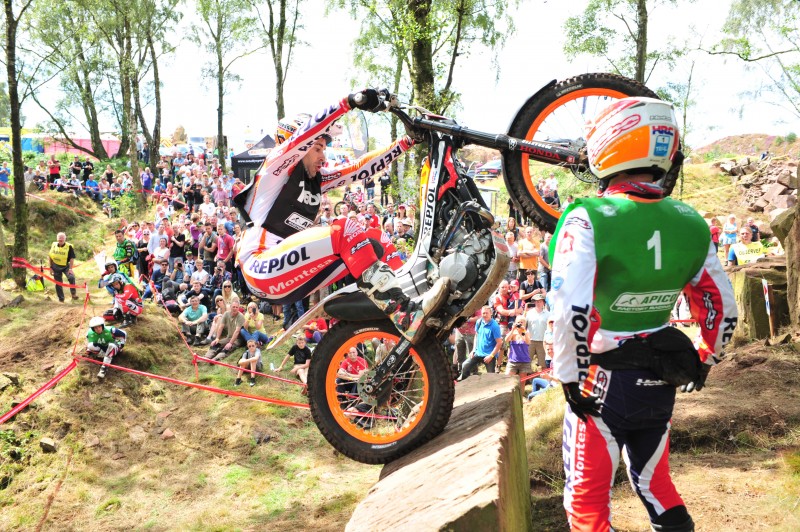 Proving his worth as the current World Trials Champion Toni Bou – Repsol Honda put on an outstanding show in the rain on day one in Great Britain. None of his rivals could not get anywhere near Bou as he extended his lead in this year’s championship over his nearest rival Adam Raga.

From as early on as lap one he looked very confident. His team mate in the Repsol Honda team Takahisa Fujinami came home in fifth and retains his fourth place in the championship standings.

It was once again a return to the Nord Vue venue just outside of the market town of Penrith in the county of Cumbria. Penrith lies less than three miles outside the boundaries of the Lake District National Park and close to the Scottish border. It welcomed the world championship riders once again to its predominantly rocky terrain for the first day of the two day event which was contested over a compact 4 kilometer course containing twelve sections to be attempted three times. The rain came at the start of the event with intermittent showers during the day which was watched by a crowd of 3,000.

Starting in the rain did not bother Toni Bou – Repsol Honda and made him only more determined as he extended his lead over Adam Raga – Gas Gas who had no answer to the riding skills of his fellow Spanish countryman. Bou cleaned all the hazards before succumbing to a single mark in the final section twelve on the opening lap. He parted with the mark on an easier part of the hazard before staying feet up over the more difficult log climb at the end.

At the start of the second lap the rain stopped but only for a short period before the heavens opened once again and with more difficult hazards to contend with Toni parted with seven marks but he had built up such an advantage it would make no difference to the final scores. His rival in the championship Adam Raga made the best score on the final lap parting with seven to Bou’s ten which was made up of two five mark penalties.

Japans Takahisa Fujinami parted with too many marks on the opening two laps to challenge for the top three but came back very strong on the last lap and just missed fourth position by a single mark to finish behind Jeroni Fajardo – Beta. Fujinami can still challenge for a top three finish in the champion as long as maintains his challenge in the next few events.

"I tried so hard to part with no marks on the opening lap before parting with the single mark on section twelve. I had ridden so well today and I am very happy feeling very confident on the machine. Today was important to win as I wanted to extend my championship lead over Adam Raga. The rain did not affect me and I look forward to action tomorrow."

"On the first two laps I was so inconsistent with my riding and I parted with far too many marks to challenge the leading riders. I came back strong on the third lap before damaging my knee when I crashed in the final hazard. I will rest tonight and try to come back stronger on day two in Great Britain." 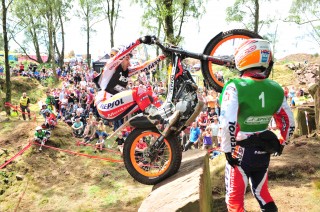